Alongside with the vast varieties of window displays and street decor, I came along this beautiful window display along Picaddily Street, which tells of the famous novella written by Charles Dickens, "Christmas Carol".

The story is a Victorian morality tale of an old and bitter miser, Ebenezer Scrooge, who undergoes a profound experience of redemption. 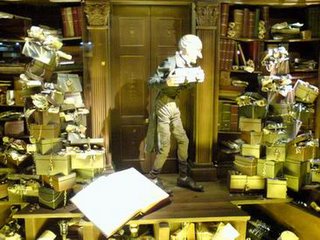 Scrooge lives a lonely life, and cares only for acumulating money. He is selfish and rude to others. 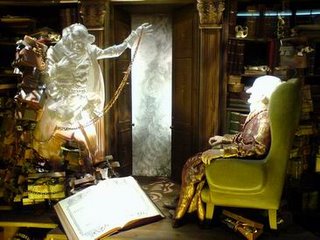 On Christmas Eve, Scrooge is visited by the ghost of his deceased business partner, Jacob Marley.

Marley, who in life was as miserly as Scrooge, is condemned to an eternity of carrying a heavy chain which he forged in life, and being unable to interfere for the good of mankind, which he would never have thought to do in life. Marley's visit is to give Scrooge a chance to avoid his fate.

Scrooge is skeptical of what he has seen and heard, but during the course of the night, he is visited by spirits of "Christmas Past", "Christmas Present" and "Christmas Yet to Come". The ghosts show Scrooge scenes from his life (past, present and future) that open his eyes and make him realise that he desperately needs love and forgiveness from his fellow men. 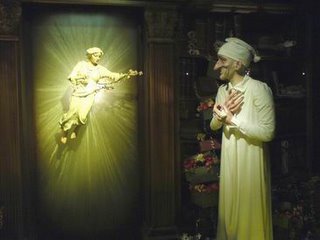 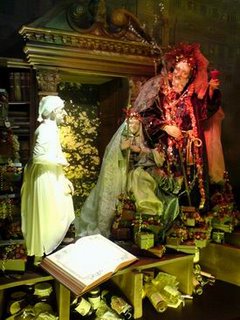 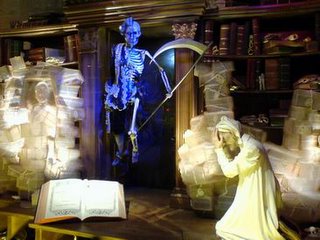 "Christmas Yet To Come" 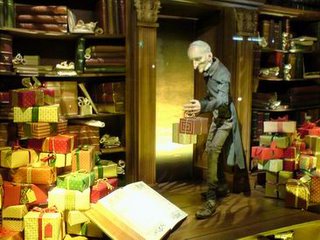 In the end, Scrooge changes his life and reverts to the generous, kind-hearted soul he was in his youth.

"Christmas Carol" cries out Dickens' recurrent themes in his works - social injustice and poverty. It strongly opposes the beliefs of Victorian Malthusianism (the ideas of Thomas Malthus, which classified all misfortunes as personal failings rather than public problems), that charity encouraged idleness and that the poor should be left to die and "decrease the surplus population". Dickens used an alternative approach in opposing this individualistic beliefs; rather than lobbying for Parliamentary reform, he voiced his views via describing Scrooge moral rebirth in this story.

This story has been integrated into the christmas tradition, and this shows our continuing beliefs that our change of heart can help solve social problems. Again, let us remind ourselves that, let change starts with ourselves, and we can change the world.

(P/S: The window display left out the characters of Bob Cratchit, and the crippled boy Tiny Tim, which I feel are quite interesting elements in the story. Being crippled, Tiny Tim's figure effectively shouts out the need for charitable giving, social awareness for the less-abled people. Also, his patient nature which enables him to accept his sufferings and grateful for charity of the non-disabled strongly contrasted Scrooge individualistic and materialistic nature.

His character helped add colours, contrasts and comparisons in the story. but the window display excludes his presence, perhaps due to lack of space for display, or to simplify the synopsis of the story. Or perhaps, instead of focusing on just Tim, the exclusion of his character in this window display plays out Scrooge's moral recovery to a more general context, instead of distinguishing clearly the line of disabled and non-disabled. Well, what do you think?)

yd, I saw this story on TV - a very good message. Nice write-up.

These pics are the window displays of a shop along Picaddily Street. The decorations were done with much intricate details and efforts.

Notice there is alwys a book laying on the ground in each picture. That is where the brief summary of the story is inserted, paragraph by paragraph.

I am still looking for other window displays which tell stories of christmas, like the Snowman or Nutcraker. :-)

Well crafted displays and good pics of them, YD.

Leaving Tiny Tim and Bob Cratchit out of "A Christmas Carol" would be like leaving Obi-Wan Kenobi out of Star Wars! They play too much of a central role in the overall theme of the story!

After all, Scrooge's change from treating Cratchit as a slave to be exploited to a human being to be respected is a key point. As for Tiny Tim, he symbolizes what Scrooge refers to when, early in the story, he callously informs the charity workers that the poor should just "die off and eliminate some of the excess population". Scrooge finds it in his heart to show compassion for a child who basically has no productive value to society.

In the story, the Ghost of Christmas Future shows Scrooge his grave when he is watching Tiny Tim's funeral. As it turns out, Scrooge's change of heart allows Tiny Tim (and Scrooge) to survive.

Still, I shouldn't nit-pick. Those displays look really nice. I'd love to see something like that in my area.